skip to main | skip to sidebar

The council of the Lithuanian Jewish Community (LJC) has decided to organize a third World Litvak Congress in August 2009, as a natural continuation of the first (2001) and second (2004) world congresses.
The most important task of the Third World Litvak Congress is to develop and strengthen contact between Litvakes in the diaspora (Lithuania's Jewish emigrants and their descendants) and the Jews who live in Lithuania
More information can be found here http://www.litjews.org/Default.aspx?Element=ViewArticle&ArticleID=1673&TopicID=2&Lang=EN

I am going to Lituania in july, maybe I should go back in august ...
Publié par Sophie Davidas à 14:43

Sophie Davidas
Sophie, born in 1965, grew up in France and studied engineering in Israel. My grand father, Naftali eliahou David, alias Tolia Davidas, was born In Kelme (Lithuania) in 1910 and was living in skuodas before coming to France in 1932. I am looking for any information, pictures, web sites about jewish life in lithuania before the war. And informations about David family from Skuodas would be wonderful. Sophie

family picture in lithuania before the war 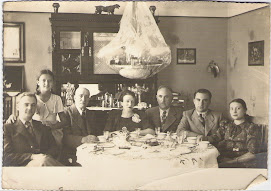 The most interesting web sites I found